Hakuna Matata; what a wonderful day!

Ever since I can remember, it has always been an absolute dream of mine to see Disney’s theatrical production of The Lion King. This afternoon, at the age of 24, I got treated to see the show at the Lyceum Theatre in London and it was all I had dreamed of and more. Throughout the performance, I felt like a kid again, like the last 18 years simply hadn’t happened. As a child of the 1990’s, I was a Disney-obsessed, I had all the video tapes and cuddly toys. In fact, I was so distraught about Mufasa’s death that I couldn’t bring myself to watch the film again. I suppose it was the first time many children had seen a death on screen with such impact, made even worse by Simba’s simple and traumatic, “You gotta get up”. It’s heartbreaking stuff, but I could not wait to see the live production… 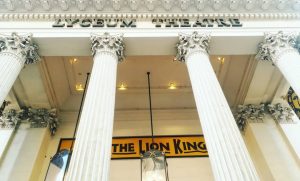 I was absolutely blown-away by the opening sequence, the “Circle of Life” starts with just Rafiki on stage singing the powerful first notes, and then the entire theatre comes to life and the beautiful animals of Pride Rock appear and parade through the audience and gather on the stage. It had me on the edge of my seat – it felt so magical and honestly I found it quite emotional, it’s such a breathtakingly beautiful moment.

Julie Taymor is a designer that I have studied for years, I have always been inspired by her imaginative innovative and impressive staging and costume designs. The use of puppetry and the way performers completely become all kinds of magnificent creatures. Performers move across the stage like gazelles with antelope puppets on their arms, the giraffes are actors on giant stilts and the most impressive of all, the Lions of Pride Rock, wear imposing head pieces that emphasis every movement. One of the highlights for me is “The Lioness Hunt”, the way the performers move and the choreography makes you forget you are watching humans, it’s incredibly beautiful.

I was sat in the stalls; row F, seat 10. Right next to the aisle. I had an excellent view of the entire stage and also the auditorium, the way they used the auditorium was an incredible way to make us feel like we were totally immersed, completely surrounded and at the very heart of the action. 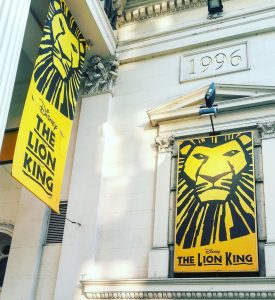 I had read warnings about young children being quite distracting when bored and restless, I had a pretty good experience. With the encapsulating story being told on stage and amazing visuals, I found it quite easy to focus on the show and block out the audience, but it can add to the fun. In fact, there was a little girl behind sat me that had fallen asleep during the first act, in the interval her mother lightheartedly said to us, “well worth the money!”, we all laughed about it but there was some painful truth – the tickets aren’t cheap!

The Lion King is an exceptional production that will leave you glowing with happiness for days. It’s an incredibly creative and emotional musical that I would quite happily watch over and over again… Please hire me, Walt Disney Productions?! I would recommend this wholeheartedly to absolutely anybody, young or old – it has no limit. I am certain it will remain the King of the West End for many years to come – I look forward to taking my children, one day.

After the show, we then had an amazing  3 course meal at Christopher’s, an incredible restaurant just opposite the Lyceum Theatre – I was truly spoilt today. Forever grateful to my  Having sadly said goodbye to All or Nothing: the Mod Musical yesterday, it was a great distraction and definitely postponed my post-show blues! 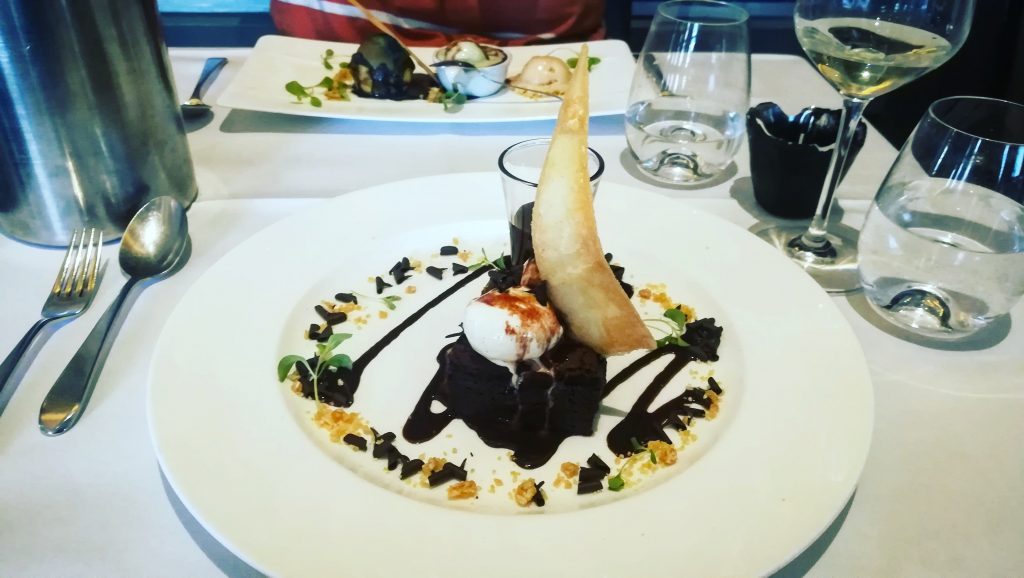